To say that I thrive online is an understatement. I’ve had the same AOL email since the early 90’s. I still use it. I will probably be forever known as Joyce8888.
My love affair with computers and the internet started with a Tandy Radio Shack computer that my husband had in his office as a high school Vo-Ag teacher. I would go to his office and copy dos codes so that I had a crude program that would tell you what day of the week any date in history fell on or something like that.

I bought a Timex Sinclair computer that hooked up to my television.  It cost a mere $99.95 at the Katz Drug Store. I think it played a few games after you enter dos commands. This was done every time you used it.
I’ll bet most of you didn’t know that in the early history of the PC you could save your programs to a cassette tape. I’d sit for hours to copy codes and save them to a cassette for my husband. Computers and I have a long relationship.
Eventually I moved on to 5½-inch floppy disks. Does anyone else remember when you had one with the program and one for data? I preferred WordPerfect but my husband’s office used WordStar so I would go help him again with documents with the two floppy disk method.
Eventually we graduated to 3½-inch disks. I gave them up a long time ago but my husband still has to have a computer with a 3 ½-inch drive.  My first experience with emails and messaging came from Prodigy an early competitor to AOL.

I’m a techie. I may not fit the profile, but I am.

David did a nice job of summarizing how the internet is used for ministry and fellowship. I would be lost without it. I live in South Dakota where I have very few friends or even acquaintances. I have no church family. I have little social interaction. My virtual world is the best I have right now. It saves me from insanity.
With a few strokes on the keyboard, I can have prayer and conversation. I can download a sermon or listen to praise music. I like old hymns. On YouTube, I can find just the hymn to drag me out of my melancholy. In the early days, I learned about revival in such places as Toronto and Pensacola. I started praying for the same thing to happen in my church. It did. 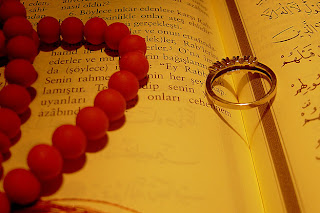 My first major experience with ministry online came in the mid-90’s. I was searching for information about Muslims, particularly ministry to Muslims. Somehow or other I started email conversations with a person in Europe who had a website Answering Islam. Through this, I was asked to moderate a support group for non-Muslim women in relationship with Muslim men. The group was to be known as “Loving a Muslim” or LAM for short.
I remember the day I sent out my first email to the group of two. Quickly, almost miraculously, the word spread. We grew quickly. Young women dating an Arab, married women with children, all with a unique bond. We were Catholic and Protestant of every variety. We saw some women rescued from bad abusive marriages. We counseled young college woman who were dating Muslim men. We explored the concepts of muta marriages and the differences between Sunni and Sh'ites. We were built up in our faith.
The first Ramadan we shared we cried and we laughed as we dealt with the complexities of this month of fasting. Along the way came 30-days of prayer for Ramadan. I would love to open up those emails and know that people around the world were praying.
I loved this group of woman. They were my dearest friends and sisters. In this group was a woman whose story I will never forget. She is a woman with a husband who is harsh and difficult. Harsh and difficult people are found in all cultures and religions, but this man is a Muslim.
She went by a pseudo-name, as she feared her husband would find out she was part of group. Many of the women did. I never did. Her story started as a Hispanic Catholic girl. She grew into a woman and married a Muslim. She went with him to his country and converted to Islam. She was a practicing Muslim for many years.
One day a group of Jehovah Witnesses came to her door. They reached out to and she converted again.  Her husband now had an apostate for a wife. In some parts of the world, she could be killed for such a thing. Now as part of this loving group of women on LAM and because of God’s drawing her, she was having second thoughts about the JW’s.
She would often say that none of the evangelical churches she now tried to attend loved her or checked on her like the JW’s.

Selah (pause and think about that)

She had no Bible other than her JW one. She was afraid of her husband. She was afraid to have a Bible in her home. She had no money to buy one.
I purchased a Bible for her and sent it to her. To her it was the most precious thing she had ever owned. She kept it in her purse. One day he opened her purse. She was standing there and waited for his anger to explode.
It didn’t. Miraculously, God hid it from his sight. He never saw it. God proved to her that He had her protected.
LAM still exists but I’m not part of it. My days as moderator for LAM were some of the best days of ministry I’ve known. I’ve moved on to other forms of ministry, including this blog.
God is alive and well in cyberspace. You can literally reach the world.
Posted by Joyce Lighari

Just another facet of who Joyce has become in the Lord.

It is really an amazing thing to find God in the recesses of the Internet - LAM - it never would have been a thought for a guy like me.

Thanks for all you do to advance God's Kingdom.

I'm with you on the tech thing - I've been doing online searching since 1979 and got my first PC (at work) in 1982. Thank you for your ministry through the wonders of technology. - DeAnn

We live in exciting times! God is all over the internet thanks to people like you Joyce.

Hearing WordStar took me back to the day...God bless you Bill Gates!