Can You Fit 2 Sawhorses in Your Car? - Heaven and Earth Link 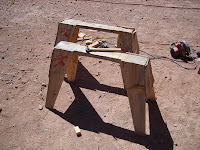 In December of 1993, I lost my job the day before Christmas - so did my wife. There on the kitchen table sat 2 pink slips for unemployment. It was during a season of real personal revival. It seemed that my faith was growing, and God was doing amazing thing. My friend and I laid hands on my pick-up and God fixed the water pump. I was in need of a $1,340 car repair for the other car, and by faith I had dropped it off at the dealer knowing I had only $13.00 in my account. A woman met me in church on Sunday morning and pressed a wad of $50's in my hand saying that God had shown her a need that I had. Wow, we hadn't told a soul!

God is faithful, and He also instructs us to do things - and when we don't. . . This week your faithful Kingdom Bloggers are going to write about a time *cringe* when we were disobedient - and how God dealt with us.
Do to the unemployment, we ran out of cash during the penalty week, we had no health insurance, and we were being evicted from our home with 2 little girls. The good news was that we were eligible for dislocated worker benefits - about half of what we were bringing home prior to Christmas.
The week before New Years, the phone rang, and a guy that I had photographed a wedding for in the previous Fall, wanted to know if he could buy the negatives. Sure I said, $750. He showed up with a check. Let me tell you what a struggle it is to pray for money, get it, and then try to part with a tithe - But we did.
Obedience is tough going some days.
I collected unemployment, worked part time in construction - an industry that I had earned a repetitive motion injury in, and left a few years earlier for the safety of the photography studio. After 26 weeks of collecting, working, and going to computer school (prophesied perfectly by a fellow in New York), time was up and the checks would end - and soon.
I had been talking with my friend Cap about what I should do. He had been in business and was trying to convince me to become a computer consultant - I could make $50 per hour he thought. Even if I worked 10 hours a week, it was at least as good as my old job. There was something godly about his counsel, and my pastor agreed with him. It wasn't even about the money - it was just something I was passionate about - it fit me. We prayed, and I went off and started, thinking, brainstorming, and talking to God. I told God I wanted to do it, I even found a part time job teaching a few computer classes - but it wasn't going to be anywhere near enough to live on.
I felt like God wanted me to do this business, but I couldn't see how; and time was running out that very week.
I had re-earned a name as a good carpenter, although I had no desire to start working full-time running nail guns, drinking cold coffee and buying all the needed tools. When you have a family, it is hard to hold out for what you want, and take chances - kids like to eat - wives like security. So I interviewed on Thursday that last week with a great company doing high-end work; they even had benefits. The owner asked me if I had any tools? "No," but I would get some.
"You don't have a truck?" (the clutch finally went even after the healed water pump) he said, "do you think you can fit a couple of sawhorses in your car?
"I don' think so." I replied.
I took the job for a lower rate until I had the tools that I needed, and had a vehicle big enough to take enough materials to work on my own. I had just $200 in the bank with no more checks on the way.
Friday morning I talked with my pastor who happened to be in the parking lot of my kid's school. There was something wrong with my decision to work as a carpenter, I told him. I couldn't figure it out. I tried to remind myself: Hadn't God miraculously spoken a career in computers over me, the brand, and even the software package? Hadn't He provided a vehicle when I had none? Hadn't he found us a great house after we were evicted for less money, with better neighbors and more room? Hadn't I earned top grades at school with glowing recommendations? Hadn't I been brought this far? But without some security in the job, I just couldn't make it work in my mind, or on a spreadsheet.
My pastor said something simple. "God will forgive you if you make the wrong decision. But remember delayed obedience is disobedience."
All weekend I struggled with the job I was supposed to start on Monday. I just couldn't see how I was going to go into business on Monday, and make a check by Friday. I had sinned taking this job, and I knew it. I couldn't start this other job and "see how it went." I would have to spend all my money on tools before the hardware store closed at 5.
"God forgive me for being disobedient!" I cried out late Sunday afternoon. (I have done this before.) I called the construction company and said that I would not be starting on Monday. I felt awful, and I was scared.
Monday I got up, and the Lord gave me a name for my business as I read Acts chapter 8. I spent my last $200 on a business phone, took the little teaching job and started as a partner of CapeCod.net a few days later - and my little company grew, and grew and grew.
I don't need to tell you how the Internet exploded in 1994 and 1995, raging on until the DOT COM bubble ended around 2000. In less than two months I needed to hire a full-time programmer and a part-time bookkeeper. A year later I had 16 employees.
Today I thank God for allowing me to be disobedient, and for being so intensely gracious to give me what he wanted to, in spite of it. He is truly faithful.
Posted by David-FireAndGrace

This is certainly an inspiring story. If only we all had faith to this degree David. God healing a water pump? Now that is real faith!