A Lesson from Daniel

This is the last week in our sharing a favorite from our own blogs. I feel compelled to share about something my youngest son taught me. It's kind of cool for me because I wrote this in January of this year, and have since then stepped out in the ministry area that I allude to here and seen God work through me. I know that God is the all powerful creator of the universe and that He does not need me to do what He wants to do. So I'm extremely grateful when He chooses to use me, when I get to be part of His work.

A lesson from Daniel 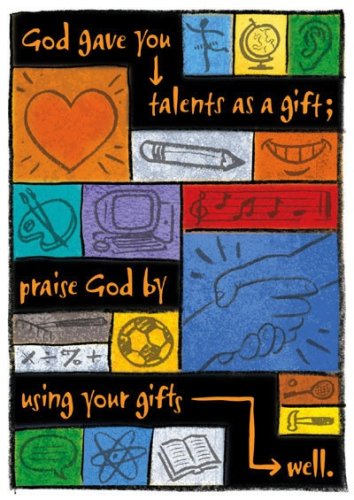 I've mentioned before that I learn a lot from my kids. Recently my youngest son Daniel, who is 15, has taught me some things worth pondering.

I've watched Daniel really struggle over the past couple of years with football. We live in a small town and football is a huge deal at the local high school. Daniel is on the team at the high school; but he doesn't do well. He works really hard; he even stays after practice and does extra running, working out and weight lifting to try to increase his ability. Because he tries so hard the coach does periodically give him chances, but he frequently messes up during those times. He's talked to me concerning this more than once. To make matters worse, his older brother who is just one grade ahead of him in school, is really good (of course this particular son happens to be 6'3" and 225lbs as a Jr in high school, so he's practically made to be a line man). All I've told Daniel is that I see such a spirit of faithfulness in him and that I think God honors that, and that I think this faithful, hardworking attitude will serve him well throughout his life. I never comment on the actual football part because I don't know much about football, he does seem to mess up, and the truth is that not everyone is good at every thing they try.

Daniel plays drums with the worship team in our small church. As part of a get-to-know-the-folks-up-here-on-the-stage-every-Sunday kind of thing, he was asked to give a testimony during church. What he shared both humbled and blessed me. It's also really had me thinking about those truths ever since he shared.

Daniel read the passage from Matthew 25:14-30 where Jesus told the parable of the talents. In a nutshell the parable is about a man who was going on a journey and gave 3 servants varying amounts of talents/money to watch while he was gone. When he returned he called the servants in to see how they had done with the money he left them. Two servants had invested and done well and they were rewarded, the servant who was given the least had done nothing with what he was given and he was punished. Daniel pointed out that not everyone was given the same amount of money to invest and that the man was most interested in what they did with what he gave them. Daniel shared about his struggles with football and then shared how the bottom line was that if God had wanted him to be the best at football he would have given him that talent but that obviously that was not God's plan for him. But that he believes God is very interested in how he uses whatever it is that he is given. He said he plays football because he thinks it's fun, and he's to the point where he chooses to do his best and just leave the rest up to God. Daniel talked about the fact that there most likely will always be people who are better at whatever it is that we each like to do, but that the talents other people have is not the really important issue. The really important issue is what we each do with what we are given.

Gee sometimes my 15yr old is smarter than me.

What Daniel shared has got me to think about, and look at, what I am doing with what God has given me. It's made me check to see if I'm using my meager talents in some areas as an excuse to not step out and serve others in these areas. There's one area in my community where there is a need and I was approached about serving in it a while back; but I turned the opportunity down because I had focused on my deficits. Recently I was approached again, but this time I'm stepping out in faith in that area simply because there is a need and I'm willing to serve. I'm choosing to rely on God's greatness instead of my giftedness.

What about you, do you ever let what you perceive to be your lack of talent keep you from serving? Do you ever refrain from participating in things that you think are fun just because you think you're not good enough at them?
Posted by Tracy

Tracy
WOW...what wisdom spoken by your son!
I was just thinking how when I entered the work force, I look to jobs that were actually so opposite my abilities. It was almost as if I looked at what others could do in these area and I saw them as successes and by golly that is where I went. I work at a Bank and also a Statistical department in a Manufacturing Company.
If you knew me, you would know these jobs were not where I could shine.
I am artistic and creative soul
The only thing that did come about that was good in my Bank job was meeting my husband.
I was the teller who could never balance her window and so all the other employees had to wait until I did so the whole day's business in the bank could be reconciled. They were not happy campers...day after day.
So...my husband ( then only a fellow employee) came to my rescue and balanced my window for me , more than once.
Your blog gave me a chance to thank God for the gifts and talents He HAS given to me
Linda

Linda - What an awesome how-I-met-my-husband story! What a sweet heart he is, not to mention that getting a husband for life out of a mediocre job is a pretty darn good deal!