In the years of being a Christian, this scripture has buoyed and strengthened me.

Even though it has comforted me, I had often wondered…why this one in particular?

A pervasive abandoned feeling affected me from a very early age. A while ago, I was given first hand information of why I felt so utterly alone, growing up.

Before that, it had been puzzling to me, because I not only grew up in a large family, but we lived in a 4 tenement house, which housed 3 more families of relatives. Up to 22 people lived in this tenement, at any one given time. It was wall to wall people. Each apartment had 4 rooms. Everyone was so familiar with one another that people walked in and out of each other’s apartment, without knocking. I remember only 1 time, that I was totally alone in that house
.
Everyone in the entire house was gone for the day. It was so quiet and unusual, that, when it finally dawned on me, I felt weird.

Here I was surrounded by many people, and yet it was not my experience to feel part of one big happy family. Being embraced, seemed elusive to me. But, why? I wondered. ... It was mysterious.

What amazes me now, is that God saw my plight. God knew the very depth of my being. He knew what portion of His word would comfort me the most. There are so many other scriptures that I love and could “fit the bill” as a source of comfort and encouragement. But He chose THIS one.

Here I am, saved for 33 plus years. The Lord continues to reveal to me just how intimately He knew me then and how utterly close He is to me now.
Does that make me want to dance a little and rejoice about being so loved and so known? You betcha’! And does it thrill me that I can tell another person, the Good News? They too, may be one who has no clue as to God’s love and care for them.

The other day, I had just the chance to do that. I was in McDonald’s. (It seems like the Lord has often chosen, either McDonalds or the Library, for me to approach people and say something encouraging to them. *grin*)

I was working on my greeting cards. Across the aisle, sat a young businessman. My guess is that he was around 40 years old. He was working on his computer. As I sat there, I felt compassion for him. I had thought of my husband and when he worked in corporate America. He had a high pressure job and was so diligent to provide for our family. I imagined that this guy might be doing the same.

We did not acknowledge one another. I left about ½ hour later.

Walking away, I had the slightest urge to talk to him about the Lord. Honestly, the prompting of the Holy Spirit was so subtle. It usually is. However, I continued to walk toward the exit, because I “reasoned” “why would this young, fairly decent dressed, guy want to hear from a woman, who could technically be his mother?” And besides, I was not “dressed the part” to be giving forth any Godly words.

So, I just pushed the Voice of God out of the recesses of my mind. My excuses made perfect sense to me. I even thought “Well if I missed this opportunity…there will always be the next time”

I got no further than the exit, when the prompting seemed stronger. In a split second I knew 2 things. One was, I had a choice. The other was that God was not going to reject me if I decided not to say anything.. But what tipped the scales to going back, was the realization of how much I love the Lord, and knew it was HE who was asking this of me.

I turned around and approached the man’s table. He seemed to shoot me a look of “Who ARE YOU? And why are you invading my space?” But having already committed myself, I initially said something about how I pray and God sometimes points out people to me, who He wants to encourage. “I just believe that the Lord wants you to know that He cares about you and your life”. Then turning to leave,
I said “Bless you

To be honest, I was like “whew! Now that is over!”

As I started to walk away, the man said “Thank you!”

What has stayed with me too, is that as I got closer to the door, I heard him call out “Thank you”…3 more times, as the truth of God sunk in. 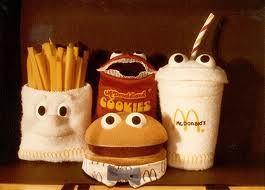 God chose to have an encounter with a man that day, amidst the Happy Meals and Milkshakes…amazing!
Posted by It's Something Beautiful

I want to thank you too Linda. What a blessing to hear a story of obedience and encouragement. I could certainly do a better job listening to God's prompts in these situations.