Just for a change of pace, your Kingdom Bloggers are going to post a "Best Of' from each of our personal blogs this week. By doing so, you will get a little better appreciation of how diverse our group actually is... and see the unifying effect of a mutual love for God.

From Tony C Today, I went back to a post February 2009 titled For What It's Worth-Buffalo Springfield 1967. That particular month I was using song titles to preface my post, so as you can already see, my personal blog is not only a tad eclectic but also very reflective of my personality. I hope you enjoy... 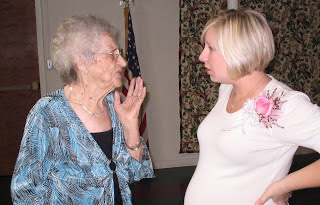 "You're carrying high, so your baby will be born on a Tuesday and have freckles..."

I love my grandmother. She will be 95 glorious years old this June...'Lord willin.' Being from the South, she is affectionately referred to as Mamaw. Now that's a funny name to people not from here, but no more peculiar than 'Meme' or 'Nene' is to most Southerners. She's part of the greatest generation in modern history. Lived through wars, a global depression and a standard of living people today would declare third world.
Many of the things I've learned in my life can be directly attributed to my grandmother, however, she has also been the source of much...shall we say... misinformation. Allow me to explain.
From an early age, I listened to her counsel and took it in without contentions.

'Don't eat those watermelon seeds, you'll grow one in your stomach.'

'Don't cross your eyes! They'll get stuck like that.'

'You get back inside with that wet hair! You'll catch your death!'
How could anyone argue with such sound advise. Better yet...how could anyone argue with her... about anything. My grandmother, even to this day, has the innate aptitude for hearing what she wants, when she wants...and only when it agrees with her opinion on the matter.
I love my grandmother. I have many fond memories of growing up in the house right next to her. As a matter of fact, here's one:

While working in the little garden behind our house one teen-aged summer day, my focus was interrupted by the sound of my grandmother shouting scripture...or pieces and blurbs of scripture, in a rather angered fashion. Naturally, I was perplexed and investigated. What I witnessed was a scene torn directly from the comic strip BC, as my grandmother repeatedly whacked a helpless, misguided black snake with a baseball bat we had left in her yard from a Sunday's game.

'Get thee'...whack...'behind me'...whack... 'Satan! I will'...whack...'bruise'...whack...'thy head'...whack
Rushing down to her, I somehow managed to get the bat away and avoid the receiving end of her wrathful swing. What I saw next was a sight that will never leave me...ever. That poor black snake of about 4 feet had been beaten so maliciously that the upper third of its body, including the head, look like a custom designed dinner plate you would find at the home of someone like Ozzie Osbourne or Marilyn Manson.

Mamaw C:' Take that snake and hang it on the fence over yonder...'

Mamaw C: ' Just do it! It will keep the other snakes away!'

Mamaw C: 'It's in the Bible! Now do it!'
I bent over to pick up the poor flattened snake...'Don't touch that snake!'
Tony C: 'But you just told me...'
Mamaw C: 'That snake can still bite you until after sunrise tomorrow...'
Tony C: 'Mamaw, that snake ain't ever biting anything...'
Mamaw C: 'Don't tell me...it's in the Bible.'
Now, we all know there isn't a passage in the Bible about makeshift snake wards or afterlife snake biting, and through the years, I've mentally filed those along with her other Bible misquotes like 'Cleanliness is next to Godliness' and 'To thine ownself be true' (which I believe actually comes from an episode of Gilligan's Island). I would never call my beloved grandmother out on any of these...it would serve no useful purpose.
I believe (or hope) God overlooks such trivially random matters too. In fact, we really don't give Him enough of the credit He deserves...and He deserves it all. Penicillin isn't mentioned in the Bible, yet God gave Alexander Fleming the talent to develop the wonder drug. Now, I'm by no means advocating or even suggesting that matters of a vial, vulgar origin should be attributed to God Almighty, but proverbs or axioms that promote stronger moral value do have purpose. We just have to be cautious and never cross an authoritative line that conflicts with God's actual word. 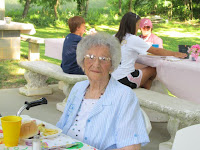 Okay, snake related issues don't really fall in the 'stronger moral values' or 'changing mankind for the better' categories...but I do love my grandmother.

For the record, she was right about the freckles.
Posted by Tony C

Tony...
Having a Southern daughter in law, I can hear the comments of Mamaw, just as she said them.
I remember once, Stephanie's mother and I were at Old Sturbridge Village in MA. It is a replica of an old New England Village. (1790-1840)
She approached a small wooden structure and was looking down and said..."Look, there is a whale down here"
I started over and thought “What in the world is she talking about...a whale??? Maybe she thought she was at Mystic Seaport in CT.
I said Hope... "Where do you see a whale down there?"
She said "Linda...I said a well not a whale!"
OK...so I don't understand Southern talk all the time.
But this still makes me laugh!
Mamaw sounds like a caring lady with lots of Grandma’s traits.
You gotta love em’
Linda
PS The snake story is a riot.
Once, I saw a snake in our yard that obviously it was just at the beginning of swallowing a mouse. It was bulging at the front of his body, right near the head. When I came upon it…I was like “Oh my dear…there is a LIZARD in our backyard!”
OK, I hear the groans and snickers!

Your grandmother is a hoot. Those are hilarious, precious memories. My grandmother was from Ireland and derisively referred to our family as "Yanks," my feet as "clodhoppers," and despaired of our American manners...I loved her!