You don't have to act like a Roman even in Rome...

The sights, sounds and even smells are unmistakable. My eyes seemed to constantly scan the scene unfolding as my walk through caused a bombardment...no better yet an eruption...of emotions buried deep from days gone by so long ago.

But, was it really that long ago? My sense of a workable timetable seemed skewed. I had last set foot here in...maybe...yes, in 2002! That had been only four short years ago, but so much had happened since that last visit making the time frame seem more expansive than it actually was. My fourth, no make that fifth, visit to America's version of the City of Lights was vastly different, however, and despite the adrenaline flow, my state of mind was far less stoic or business like than the prior four trips. This time I was truly excited to be here with my wife, family and friends. 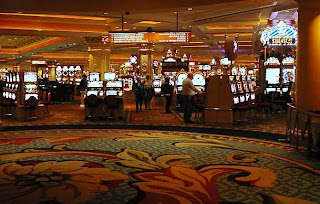 There is no other city in the world like Vegas. I had returned to Hawaii, where I had lived at one time, with my new bride just a few years prior and enjoyed ever single moment. But the Aloha State didn't harness any of the dark, almost mocking, ghost of lifestyles past that Vegas did. My last trip here had been eventful in a number of ways. First and foremost, I had left the town that breaks most with a wad of winnings. Five figures worth to be exact. Only one of my prior four trips had resulted in me leaving money behind, but never had I been that hot. It didn't seem like I could lose as I rolled winnings into more winnings. My last visit had seen me depart full of self-admiration and even arrogance.

Despite the high note in confidence and cash flow, things would take a decisively nasty turn upon my return home. My life would begin to be turned upside down in a number of ways and a number of times eventually resembling a snow globe with me at the center of the blizzard-like scene. Chaos reigned in my life. I lived loose and free...no not free...nothing is truly free. Anything worth having comes with a price, and my way of living was paid for with intense loneliness, overwhelming guilt and crushing weights of anxiety.

As it all swept back over me like a rush of invisible locus swarming to engulf me, my love took hold of my hand. "Are you okay?" she quietly asked with genuine concern. "I'm fine. Just a lot of demons still lurking I guess," I tried to be reassuring. Not quite fully understanding the magnitude of my response yet sensing a hint of despair in my voice, she took tighter hold of my hand and inched a little closer to me as we walked. Instantly, a calmness fell over me, and I whispered a quick prayer for protection. Father, you know where I've been and the things I've done, and I gave those to You years ago. I know I've willingly put myself in this situation, but I ask for Your guidance, for strength, and your protection. I refuse to let Satan beat me down with things of the past. We are here to have fun, but only as You see proper. Thank you for loving such a mess of a man like me. In my Savior's name I come to You with this prayer.

As we moved deeper into the labyrinth of buzzing and blinking and clinking and clanking, I felt more at ease. My goal was to just come here with family and friends and have a good time. The marketing slogan proclaimed, 'What happens in Vegas stays in Vegas,' but apparently that advertising company isn't aware of or fails to acknowledge an omnipotent God that transcends more than the fear of loose lips or unflattering headlines. The real trick is to make sure nothing happens that I wouldn't want Him to see...which encompasses in fact everything.

Everyone around me in our group chatted and took in the magnificence of the world-class resort. A billion dollar establishment that set on a row of similar such establishments and stretched 3.8 miles. Real estate and revenues worth more than the GDP of many small countries. All designed with one thing in mind...to get you to put your quarter into that slot...repeatedly.

Despite my initial foreboding demeanor, I started to relax and let go of any dread that tried to linger. As we approached the back end of the enormous casino, we approached the very spot where it had all gone down. To the group, it was just another instrument of the gambling, but to me it represented a time in my life when beating the man foolishly seemed more fulfilling than
pleasing the One. As I stood staring into the enormous sports book, a calmness blanketed me. 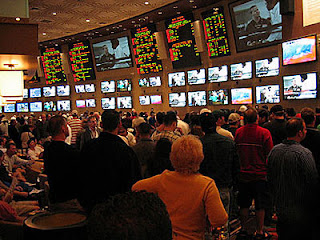 I looked at the people sitting and gazing almost lifelessly at the Big Board. Endless odds and propositions filled the large center display floating among what seemed an endless number of screens constantly feeding updates, scores and highlights. A mecca for most any sports enthusiast, gambler or not. A small swell of pride formed as I realized that I had come here and beat the odds, but it was quickly deflated by the lasting memory of what it had cost me in the long run. Money can be the root of evil, but the love of money truly is the root of all evil. I was looking directly at some of that love mixed with unrealized delusions.

Thank you Lord for delivery me from my enemy. As I continued on, my group was unaware of the brief internal strife that had left as quickly as it had appeared. Somehow, my love was far to attuned to my inner workings not to sense the brief uneasiness of the moment. "You still okay?" she said so softly. " Yes, I am. Thank you," squeezing her hand just a slight bit more. She probably received my acknowledgement as mere politeness, but it was intended on a completely different scale...and God knew exactly what I was thanking her for from the bottom of my heart.
Posted by Tony C

The tagline, "What happens in Vegas, you will give an account to the Creator of the Universe," just won't sell, I guess.

We all have weaknesses. When we give them over to God he covers us where our armor is most weak. He fights the battles we can never hope to win.

But only when we turn to Him for the strength we don't have. And sometimes He uses our loved ones to be physical shoulders we can lean on during our tour of the trenches.

God bless and thank you for sharing what God has done in your life.

Tony...
I join you in praising our God, who has forgiven us completely. We might from time to time, almost have a conversation with Him, bringing 'it' all up again and His answer is "Who?..what?...when?...I don't remember, child"
Also, thank the Lord for your loving and sensitive Bride.
Linda