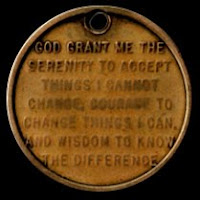 There in a kitchen, one decorated with copper-tone appliances - the refrigerator adorned with pictures of my nieces, an unfinished shopping list, a calender, magnets; one with the Serenity Prayer, along with mementos from meaningful events in my mother's life; all lit by a simple incandescent ceiling light, I stood.

Like the opening scene from an episode of CSI, I waited for the headlights of my friend's car to disappear from the driveway. As the high-beams cascaded across the faux maple cabinets, I was finally alone.

In an rush of emotion like a freight train - an orgasm of excitement, rationalization, denial and pain, I grabbed the hammered copper handle and opened the door to the liquor cabinet. My favorite, vodka, gone! The rum, watered down to nearly nothing from maintaining the level to the pencil mark - and there - a bottle of Cutty Sark Scotch; green glass glistening in the shapely curve just above the schooner clad yellow label.

In the midst of it all, my only thought: "Isn't this the same stuff that made me sick one New Year's eve?" Sure, a sane person would be thinking, "how much damage has demon alcohol caused you and your family already?" After all, your mother is out at an Al-Anon convention at this very moment. Wasn't it on this very spot, right here on the kitchen floor, that your dad passed out and you thought he was dead?

No, the insanity of it all, was myopic focus on the much awaited, yet unpredictable and magical effects of John Barleycorn - regardless of the consequences. Won't it be great to fall off to sleep and forget that you're alone, the bills aren't paid, and your "friends" are off somewhere else because you are out of drugs?

The trusted warmth, soon to blot out the clamor of anxiety, was calling my name.

I unscrewed the metal cap and filled a drinking glass as the ice cubes crackled; rising just above the rim. The amber liquid so romantic, so cunning, so baffling... I didn't know what day it was then, but I do now: October 25th, 1980.

I took a gulp as the ice cubes crashed into my upper lip -- and then another and another. In between cigarettes I continued to refilled the cheap green glass, one with wrinkles on it like a Charpee puppy. As I stood at the counter I remembered that my father used to drink his Hull's Export beer from 16 ounce bar bottles here too.

It could have been like any other day in the life of an alcoholic, but because of grace, it was the last. The intended effect never took hold, and I lay awake all night consumed with what a mess I was making of my life. Some time the next morning I had a thought in between cravings for a refill: I had turned out just like my father.

Some years earlier I found God, but it was going to take some real grace to get me off alcohol. Even in the midst of the fog, the Holy Spirit was at work. You can read about that HERE.

I was 22, angry, depressed, and finally determined to break the habit. Some of my closest friends didn't know what I was going through, and I was far too ashamed to tell them. It took me a few weeks to clear up enough to pray, "God, I don't want to be like my father. Please help me to stay clean and sober." Certainly I have said that prayer and many like it since then, but this was the first real prayer that God answered for me.

I had a lot of hope and help from others - and AA made a huge difference. Thanks, Dennis, Kent, Eddie, and others like you who reached out to me in those early days. I am grateful for others who walked the road before me, and for those that have invested in my life since.

I received a gift that opened the doors to breaking a family curse, to salvation and many other amazing things. In meetings I was told to do it "One Day at a Time" - you know, as Jesus said, "Therefore do not worry about tomorrow, for tomorrow will worry about itself." We said the Lord's prayer, also a quote of Jesus. Those things are still comforting me today in many different circumstances.

Without alcohol or drugs -- simply by the grace of God, I have endured many things that this life has thrown at me- and some from the devil too. Yet, God has worked all things for the good (Romans 8:28) - even my mistakes.

I have carried my "24 hour" chip which is posted at the top of this blog. On it is a condensed version of the following prayer. Interestingly - it was one of the messages on the door of the refrigerator that miraculous day in 1980 - 30 years ago - this very same evening.

Living one day at a time;
Enjoying one moment at a time;
Accepting hardships as the pathway to peace;
Taking, as He did, this sinful world
as it is, not as I would have it;
Trusting that He will make all things right
if I surrender to His Will;
That I may be reasonably happy in this life
and supremely happy with Him
Forever in the next.
Amen.

David...
I too grew up in an alcoholic home. Never daily drinking yet always on edge for the next "crisis"
I made a silent vow, never to be that way ( bad idea to make such judgemental vows) and yet I succumbed and became one of them
I guess you could say I was a "closet" drinker in the end. I certainly was not a "happy drunk"...people knew there was something very wrong with me, but they couldn't quite put their finger on it. I became a master at hiding.
It was a nurse friend Susan and my brother Ray, who had the courage to confront me with truth. I didn't "give up" right away, but I could never forget their conversations with me. Truth has a way of doing that.
This past year, in June, I celebrated 31 years of sobriety.
I say AA saved my life, knowing it is the Lord that deserves the thanks. Yet I have such a high regard for the program. For myself, it became my journey, back to God and the beginning of the life I have today.
I celebrate with you, your sobriety David
Linda

Thanks, Linda. How only wish I knew then, what I know now!

It's so wonderful to read how God has manifested His grace in your life David.