Is Israel Today the Same Israel of Jesus? By Tony C 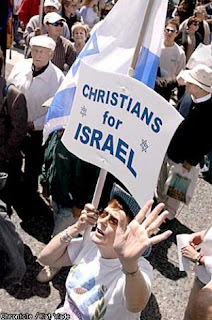 Have you ever been to the Holy Land? Do you have an opinion either way on the position of Israel's relationship to Christianity? This week your Kingdom Bloggers will be exploring the topic of Israel and what personal connection, if any, each of us has to the nation.


Once again, I might be using my current position of picking weekly topics for Kingdom Bloggers a bit selfishly. Israel has been a topic of great interest to me over the past year. While I feel I have a good grasp on the political issues surrounding our close ally, the deeply rooted evangelical support for the state still somewhat baffles me.

I have several relatives who have travelled to the Holy Land. Of course, that was in days long ago when tensions and violence were no where near current levels in the country. Each one of them has related a tremendous spiritual experience being in the same areas that Jesus walked 2,000 years ago. I get that.

Where the ground gets a little shaking for me is the seemingly blind allegiance evangelical Christians have for the nation/state. My Sunday School class just finished a series in the books of Joshua and Judges, so I understand the biblical history and the significance of Israel in God's overall plan of salvation. But is the nation of Israel today the same Israel spoken about in God's word?

I'm not so sure and here's why. The Children of Israel were chosen by God, and despite tremendous efforts in disobedience, and were to be the bloodline from where Jesus would be born. Mission completed. But the same descendants of Judah that joined Jesus' ministry are also the same descendants that demanded His crucifixion. What gives?

The connection and continuation between the Old and New Testament or unmistakable and undeniable. I clearly see and understand that. Where I get a bit clouded is the comparison to the nation of Israel of the Old Testament, the Jews of the New Testament, and the current make up of the country of modern day Israel.

According to the Israel Central Bureau of Statistics, the population in 2011 was 75.4% Jewish, 20.6% Arab, and 2.1% Christian. That means, by definition, that 96% of the nation does not believe that Jesus Christ came and died for the sins of the world. Adding to the confusion is an additional statistic that shows only 65% of those claiming to be Jewish also state a belief in God. Now what gives?

While my quest for more understanding on the connection between God's covenant with Abraham and the modern day state of Israel is far from over (if there actually is a connection), I will still lean for now on the words of Paul in Romans:

It pleased them indeed, and they are their debtors. For if the Gentiles have been partakers of their (the Jews) spiritual things, their duty is also to minister to them in material things.

The is no denying Jesus was forthcoming about His Jewish heritage, and I completely understand why. God endured great long suffering with His chosen people, and they obviously hold a special place in His heart. Jesus came to minister to the Jews, but He died for all of mankind. I don't, however, buy the argument of Pat Robertson and some other Evangelical Christian talking heads who frequently quote the scripture from John 4:22 as contemporary support for Israel when Jesus tells the woman at the well ...salvation is from the Jews.

First, Jesus is clearly speaking of His role in God's plan of salvation for all and the fact that He is a Jew. Eternal life would not be found in the Samaritans or any Gentiles for that matter.

Second, are the Jews Jesus refers to in this passage the same self-identifying Jews of today's Israel? Honestly, I don't know, but I will continue to study while I support Israel for the obvious political reasons I do understand.
Posted by Tony C

There is no Scripture that states has been baptized shall not be saved.

There are not any antithetical Scriptures that state men do not have to be born of water to enter the kingdom of God.

Search as you will, you cannot find one contradictory Scripture that says water baptism is not for the forgiveness of your sins.

There is no verse of Scripture that say our body of sin was not done away through being baptized into Christ.

Colossians 2:12-13 having been buried with Him in baptism, in which you were also raised up with Him through faith in the working of God, who raised Him from the dead . 13 When you were dead in your transgressions and the uncircuncision of your flesh, He made you alive together with Him, having forgiven us all our transgressions.

There is no opposing Scripture that says being buried with Him in baptism has nothing to do forgiveness of transgressions.

Ephesians 5:25-27 ...just as Christ also loved the church and gave Himself up for her, 26 so that He might sanctify her, having cleansed her by the washing of water with the word, 27 that He might present to Himself the church in all her glory, having no spot or wrinkle or any such thing; but that she would be holy and blameless.

There is not a verse in the Bible that says Jesus did not cleanse the church by the washing of water with the word.

It is impossible to find the Scripture that states water baptism does not save you.


The statements you will not find in the Bible.
1. Baptism does not save.
2. Baptism is not essential to be saved.
3. Baptism is not for the forgiveness of sins.
4. Baptism is only for men who are already saved.
5. Baptism has absolutely nothing to do with salvation.

THE FIVE STATEMENTS ARE ONLY FOUND IN CREED BOOKS, BIBLE COMMENTARIES AND OTHER WRITINGS OF MEN.


IF YOU USE SCRIPTURE ALONE, WATER BAPTISM IS A ONE-SIDED DEBATE!


YOU ARE INVITED TO FOLLOW MY CHRISTIAN BLOG. http:/steve-finnell.blogspot.com