I warmly remember...and for that I'm very thankful. by Tony C

Welcome to December! All this month on Kingdom Bloggers, we will each be taking a weekly trip down Memory Lane and sharing some of our fondest moments/people. We start the month by posting about one of our favorite Sunday School classes/teachers.

I really can't complain because I picked the theme for the month, but this week's subject is particularly difficult for me. I've had a number of influential Sunday School teachers and memorable classes, and thinking through the multiple choices brings a warmth of memories flooding to my heart. Just this weekend alone, I spoke of two very influential people from the topic. Since I have to pick one, here it goes...

Some people can make you laugh just reading the phonebook. Paul Rector was one of those guys. 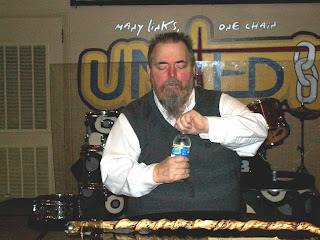 For several years, I just had to look directly across an aisle on Sunday mornings and nights along with Wednesday nights to see Paul sitting in his normal spot at church. Often when we dismissed church with a closing prayer while joining hands across the aisles, my hand would end up in his. He would make a joke about me standing on the pew, so I could reach his hand, and I would fire back with warnings of lustful thoughts during church services.

We had that type of relationship...and I loved it.

Part of the camaraderie we shared stemmed from being kindred spirits. Paul loved God very much, but God hadn't always been first in Paul's adult life. Paul loved music and had played in a number of bands. He loved to teach and speak on Biblical subjects and didn't often mince words. God blessed Paul, much like his namesake, with a tremendous testimony...and he wasn't afraid to share it with anyone who would listen either.

Like my friend Paul, I understand and appreciate the limitless bounds of God's grace from a standpoint of someone who oft tested those limits. We had a number of great conversation just on that subject matter alone. When I was approached about teaching a Sunday School class, I called Paul for guidance because I knew he was a wonderful example. He was teaching the class I attended and had been nationally recognized for his efforts (great story here).

Over his last several years, diabetes robbed my friend of many things we take for granted. He lost his eye sight then much of his mobility. This is where it gets tough for me...

Paul never, ever let those things get him down. He continued to teach Sunday School and praise his Father through the storm. He would always send a whisper of encouragement my way as I would take my seat across from him after worship music had concluded. Great job little buddy. Hot drumming today. Way to wake these people up brother. He would always take time to talk to anyone about God's word even on his worst days.

My friend had a stroke early in 2011 that eventually took him Home. He left behind a loving, tireless wife who has been a family anchor for so long, a son I'm honored to call my dear friend, and a daughter that completely adored him. He never saw/heard his son in the pulpit or got to hold his grandson, but he would be immensely proud of both.

I miss my friend and mentor, and I think of him often. Right after he passed in April 2011, I thought of a way to make him laugh given the opportunity again. So Paul, from the bottom of my heart, this one's for you brother...save me a seat close to you please.

Tony...
What a great friend and mentor.
I am always drawn to Christians who take their walk very seriously and at the same time can engage in humor. I love it and I can see that is one of the many things you liked about your friend Paul.
What an honor for him being named Teacher of the Year and the Hawaiin vacation was not too shabby either. Thanks for giving us a glimpse into someone who is a part of the fabric of your life
Linda
PS I got a real kick out of the song too. the words are a riot